Run from the Light. 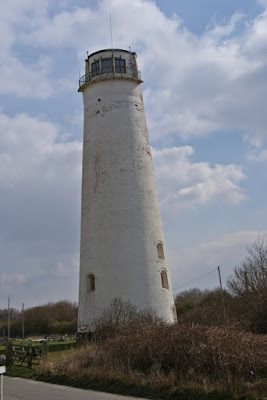 This is Leasowe Lighthouse, constructed from 660,000 bricks in 1763. Situated at the north end of the Wirral, it was flashing its lights until 1908 at which time it's operator was Mrs Annie Williams, the only female lighthouse keeper in the country. It survives as a mini museum thanks to the Friends of Lease Lighthouse and it's also the base for the Wirral Coastal Park ranger service. Lease has an interesting claim to fame in that here started the world's first commercial hovercraft service carrying holidaymakers to Rhyl. It was not a profitable business and it was soon discontinued.(maybe the weather had something to do with this, the 1960's saw the coolest summers of the 20th Century.) Angela Eagle, who has been in the news lately, is the local MP - perhaps she's been to the top watching her constituency with her eagle eye!

Leasowe Lighthouse is also the registration point for the Wirral Seaside run which is a point to point race along the seafront, which here is known as Mockbeggar Wharf. (In April we also ran past a lighthouse at Point Cartwright, a big concrete tower built in 1978 in Australia.) Here's a picture of Vicky emerging from the building proudly displaying her race number. One advantage of a point to point race is that if you have a tail wind all the way you can get a good time - and our times were indeed good! However the only race we can compare it with is the next Wirral Seaside run as the distance is a fairly idiosyncratic 4.92K. The clear disadvantage of a point to point race is that at the finish we were 4.92K away from the car but at least it wasn't raining. Having run along the Mockbeggar Wharf it was entirely appropriate that we were able to repair to the Mockbeggar Hall for some nice pints of.

Still using Woolworths' trusty products? I rustled through my various toolboxes looking for some picture hooks and came across this unopened packet - is it worth anything? I doubt it and you can most likely get stuff like this at car boot sales - it's actually less than eight years since the last Woolworths store closed in the UK. The original parent company founded by Frank Winfield Woolworth in the US is still going strong and Woolworths in Australia is one of the two big supermarket chains over there. Aussie Woolies is not related at all to FW Woolworth -apparently the owners of a local store in Sydney discovered that Woolworths had failed to register their trade name down under!
Posted by Travelling Light at 4:24 AM No comments:

A Mini Tourist Guide to Cagliari

I never managed to write much about my 5 months in Sardinia, mainly as I was far too busy to find time to idly blog. So this is a bit belated but might be useful if you're planning a trip in the near future! Cagliari is the capital of Sardinia - it's not too big and easy to walk around. However most of the tourists don’t seem to think so as they throng around the Marina area and don’t get up to the Castello which is the oldest part of town. (Make sure you go up the Torre dell’elefante which is top left of this picture.) I lived in Castello for nearly 5 months and loved it.
The Marina area pictured in the foreground has lots of touristy restaurants, most have some Sardinian specialities - we were advised to go to Dal Corsaro on Via Sardegno but never actually ate there! Pricier, but usually busy, are the restaurants on the battlements of Castello, Libarium is the popular one but the locals seem to go to others  either side of Libarium. Most restaurants don’t open until 7.30 - 8 ish but they close earlier than you might expect - it’s not like Spain!

There’s plenty of Italian and Sardinian microbrewery beer around - you might find some in the restaurants, but the best bar with a range of straight and bottled brews is Il Merlo Parlante, Via Portascalas. If you walk past in the daytime you wouldn’t know there was anything there but between 7.30 and 8 a wooden door opens up and the long bar inside fills up pretty quickly. We went there regularly. If you want a beer earlier on you have the touristy bars at Piazza Jenne which we didn’t go in - the waiters outside will pester you trying entice you in with special deals. Round the corner is a big Irish (but not really Irish) pub, The Old Square on Vittoriio Emanuele II, just about the only place open when the rugby world cup afternoon matches were on - if you go there ask for the Italian bottled beer list - some good stuff there. And last but not least, Carlo and Sasha’s tiny pub Lima Lima is close to the shopping street near Bastion St Remy - it’s on Via Iglesias and usually opens at 6.30 pm (so we got to know Carlo and Sasha pretty well - give them our regards if you see them!) he usually has at least one local draught beer and he owns an eclectic beer shop over the road. He has occasional music nights but you’d need to reserve a table if you want to sit. 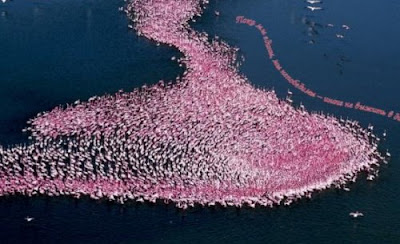 Italian word for flamingos is 'Fennicotteri!

You could spend all your time in the middle of Cagliari  - lots of churches, cathedrals, etc., but if you get a chance go down to see the flamingoes at Stagno Molentargius. Or even take a bus to Poetto Beach (can be absolutely packed but you’ll see the Italians at play!) In the mornings there is often a pink sheen on the water in the distance - just down from Torre San Pancrazio - as you come down through the North Eastern gate from Castello you’ll see them in the distance - this was the way I walked to work every morning!

http://www.microbirrifici.org/Sardegna_birrifici_regione.aspx is a beer website for Italy that was full of fascinating information and I found it very useful - they’ve revamped the website for some reason and now it’s not nearly as informative.
Posted by Travelling Light at 10:46 AM No comments: